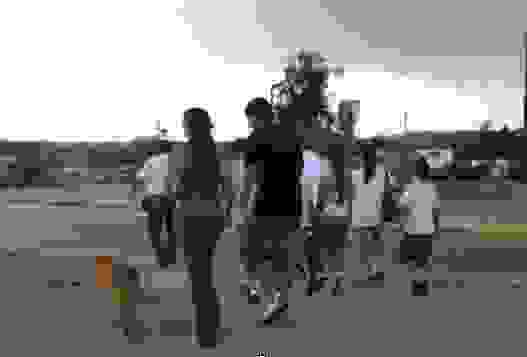 Josie was known as the "healing dog"  Every August, WY US Attorney's office would sponsor a Healing Walk for families who were affected by domestic violence or homicide on the Wind River Indian reservation.

Little did I know that on this day, while we were helping others to heal their grief from tragic losses, a similar domestic abuse situation was going on in our own home.  River, my wildlife service dog had been poisoned while we were gone, in her own home.  The man who did this did nothing to help her.  I was told when I got back that River peed on the bed and that he hit her and put her outside.  What I wasn't told was, River ingested 22 of his Hydrochlorothiazide pills, a prescription for high blood pressure. The pills have a very bitter taste, the emergency vet said she would not have eaten them on her own.  River was showing symptoms of a drug overdose.  The man who did this hit her multiple times for urinating in the house and then put her outside for six hours.  When we got back at midnight from the Healing Walk, nothing was said about the pills, just that River was peeing in the house and he hit her.

The next morning came, we were having breakfast with friends when the man said "Oh, by the way, River ate 22 of my Hydrochlorothiazide pills"  there was a smirk on his face when he said this to me in front of our friends.  I demanded to know what he did to help her and why he didn't tell me sooner.  His response was "I was teaching her a lesson"  so nothing was done to help her.   He is an EMT, he taught EMS classes on drug overdoses and toxins.  I rushed River to the emergency vet where she was hospitalized for days.  Just about lost her, she was in very serious condition.  Two weeks later she had to be hospitalized again.

This incident became the turning point in the abuse, it showed just what this man was capable of and just how dangerous he could be; it went from yelling and hitting of the animals to more serious and malicious abuse, the same type of abuse happened towards me.

In public, this man talked about what a wonderful wildlife service dog River was, in private, he was her worst nightmare.  People could not or would not believe just what the animals and I were being subjected to by this man in their own home.

Josie was not immune to domestic violence

Moose was not immune to domestic violence

Princess Z was not immune to domestic violence

We did learn that in the abuser's previous marriage, he would unmercifully beat their dog.  There is a history of physical abuse with this man and an explosive temper.